Back to Latest News

KinetiCor’s technology designed to compensate for movement during scans 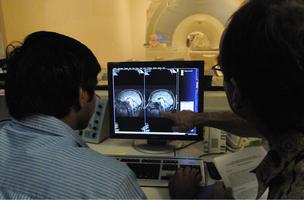 A startup called KinetiCor Inc., which is getting seed capital and management expertise from the University of Hawaii Manoa, among others, is trying to commercialize a technology designed to bring clarity to the magnetic resonance images generated in hospitals to diagnose a range of conditions. If successful, the company could earn tens of millions of dollars for UH and help President M.R.C. Greenwood gain momentum for the university’s technology transfer program.

KinetiCor’s developers include Dr. Jeffrey Yu, its president and CEO as well as a consultant to The Queen’s Health Systems;Dr. Thomas Ernst, professor and inventor at the John A. Burns School of Medicine; Will Alameida, its chief operating officer and a technology transfer veteran; and, Barry Weinman, its chairman and the founding partner of Allegis Capital, a $700 million Silicon Valley venture capital fund.

Company officials would not disclose a potential value for KinetiCor, but Yu said $2 billion worth of MRIs must be redone every year because of poor image quality due to patient movement. The company is using hardware and software that compensates for body movement during an MRI scan.

KinetiCor’s state-of-the-art motion correction technology will become an integral part of MRI scanners sold globally, if all goes according to plan, creating substantial revenue growth opportunities for the company, a royalty stream to the University of Hawaii and a nice return for investors, said Alameida.

KinetiCor executed a definitive agreement with UH for exclusive patent rights to intellectual property developed during a span of five years by these researchers in the field of prospective motion correction MR imaging.

Also included in the multicenter research initiative and license agreement are the Medical College of Wisconsin, The Queen’s Medical Center and the Research Foundation at University of Wisconsin Milwaukee.

Investors in the company include Queen’s, Hawaii Medical Service Association, or HMSA, and the Upside Fund, a venture capital fund managed by the UH Foundation in conjunction with the Hawaii Strategic Development Corp. and the Research Corporation of the University of Hawaii.

The research is currently being done at Queen’s in collaboration with UH, Mainland and German researchers and scientists.

“We are taking this technology from Hawaii to the Mainland and elsewhere,” said Yu. “We are selling to research institutions around the globe and working on the commercial product.”

Ernst told PBN that KinetiCor has not yet been cleared by the U.S. Food and Drug Administration, which is part of the commercialization process.

“We expect that the FDA process will take up to two years,” Yu said. “Research institutions may use it for research studies, but for regular clinical use it needs FDA clearance.”

Once it receives clearance from the FDA, Yu said KinetiCor officials believe that the technology has the potential to be utilized by every MRI scanner in the world.

Although a production facility for KinetiCor is unlikely to be located in Hawaii, Alameida says that it would be reasonable to open an office to house engineers, administration and support staff of dozens of people in its maturity.

KinetiCor’s technology, which costs about $150,000 for one unit at the research level, would be sold through MRI vendors such as Siemens.

“What’s really important is to get Hawaii technology out into the marketplace,” Yu said. “I think that UH and Queen’s developed some great technology, but we are not as good as the premier Mainland institutions at commercializing the technology.”

UH isn’t the only one that will benefit if KinetiCor is successful.

“The profits of the company go back to the investors, such as HMSA, UH and Queen’s, and they can use those profits for things that are good for Hawaii,” Yu said.

Art Ushijima, president and CEO of The Queen’s Health Systems, told PBN in an email through a spokeswoman that KinetiCor represents a breakthrough in MRI technology.

“Queen’s is pleased to have played an important role in developing this new technology, which will eventually have global benefit to patient care,” he said. “KinetiCor capitalizes on intellectual property resulting from investments in public-private research partnerships.”

Meanwhile, Steve Van Ribbink, chief financial and services officer for HMSA, told PBN in an email through a spokeswoman that its members deserve quality care at an affordable cost, and KinetiCor could provide the company with an opportunity to give them both.

“This technology will make MRIs available to more of our members, and it will help save money by reducing the need for multiple procedures,” he said. “We’re proud that Hawaii is making advances in the health-care industry that will benefit the people of Hawaii and people throughout the country.”

Greenwood has made improving tech transfer and research initiatives at the university a priority.

To that end, she has set an ambitious goal to more than double the UH system’s outside research funding from the current level of less than $500 million to $1 billion per year by 2022. Her plans include hiring or developing 50 top scientists during the next decade.

“We are still working hard on doing this,” she told PBN. “We do need to improve not only our declaration of our technology but also how we are going to manage to move things out.”

A key part of this effort is the hiring of a vice president for research and innovation, who should be in place by July 1.

“Then it will be [this person’s] responsibility to ensure we have a real serious connection to commercialization,” Greenwood said. “What we’re trying to do is build a research industry.”

She is open about the fact that 2012, which was supposed to have been a big year for building UH’s research capacity, was not productive mainly because of issues that consumed the university’s time, including dealing with the aftermath of the Stevie Wonder concert scam that was designed as a fundraiser for the athletics department.

But there were small improvements in tech transfer.

Last year, the university received 53 confidential documents from companies known as “invention disclosures,” compared to 39 in 2011. Four U.S. patents were issued in 2012, up from two in 2011. However, license/option agreements executed by UH dropped to four in 2012, from nine in 2011.

Besides KinetiCor, UH research has been able to spin off startups such as Ala Wai Pharma Inc., which is in the process of creating a new delivery system for the flu remedy Relenza.

The technology is not licensed to Ala Wai Pharma, according to a JABSOM spokeswoman.

UH and JABSOM have equity stakes in the flu delivery system company, which is pursuing animal studies and gearing up for more advanced clinical trials as well as continuing the patent process, which takes a long time.

“They’re in the early stages of getting that done,” the JABSOM spokeswoman said.

Companies such as KinetiCor and Ala Wai Pharma are examples of how UH’s research can help build a bigger research industry in Hawaii, Greenwood said.

“We believe that UH is uniquely qualified to build a bigger research industry [in Hawaii, and] we are hoping as we do that there will be more commercialization,” she said.